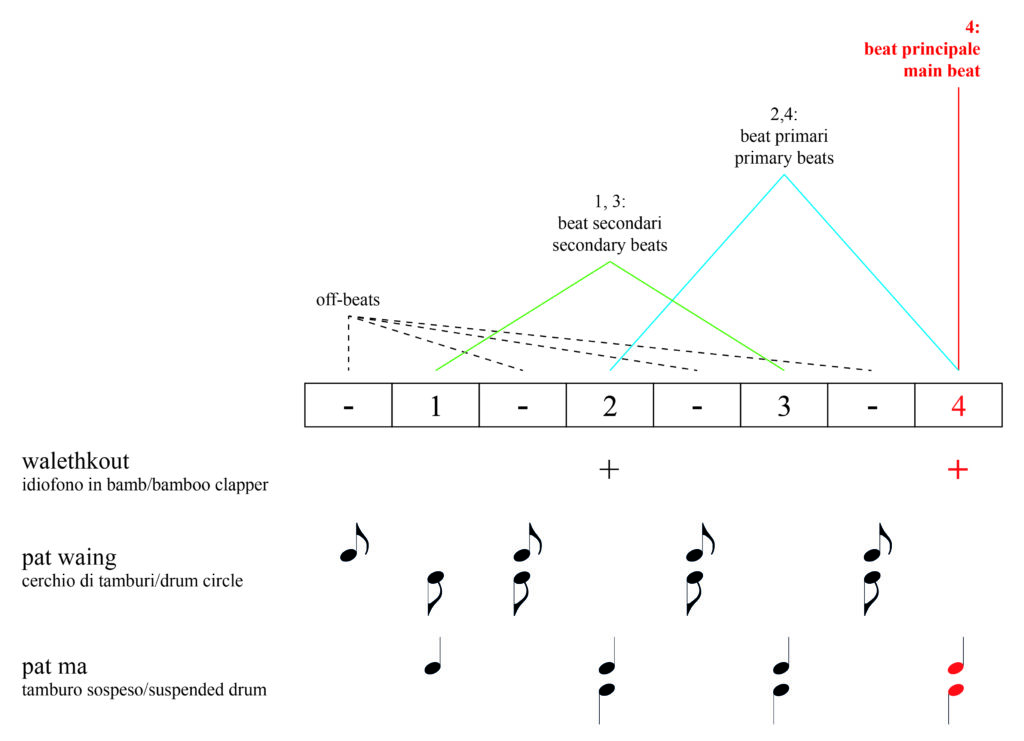 Pat waing and pat ma: analysis of the metric-rhythmic interlocking

The nat hsaing musical style is characterised by rhythms and melodies usually performed at a high speed. This is made possible by the use of a strict metric-rhythmic interlocking between the musicians of the ensemble – a feature also typical of other South East Asian ensembles.

In the nat hsaing, the metric-rhythmic weave becomes evident in the combined action of the pat waing drum circle and the pat ma suspended drum. The two main drums of the ensemble interact according to the time marked by the two small idiophones – the si (small cymbals) and the wa/walethkout (bamboo clapper) – constructing the metric-rhythmic cycles together.

The video presents an analysis of this weaving technique. Starting from the metric-rhythmic cycle characterising the first instrumental section A of the song “Shwe Byone Maung”, the analysis shows some typical elements of the metric-rhythmic interlocking between pat waing (drum circle), pat ma (suspended drum) and walethkout (bamboo clapper).

The alternating action of the si and wa/walethkout idiophones is arranged according to specific metrical forms, which can be more or less associated to specific repertoires. In general, in all the traditional Burmese music repertoires, the sound of the si marks the secondary beats; the sound of the wa/walethkout marks the primary beats. In this way, these idiophones provide the metric reference to the rest of the ensemble and, if present, to the dancers; their role is thus paramount.

As in other South East Asian music cultures, the final beat marked by the wa/walethkout is perceived as the one around which the perception of the musical phrase is constructed and oriented; it represents the main primary beat.

In the nat hsaing, the most common metric cycle is the wa lat si. This is binary and presents a “squared” character, as it is constructed on the regular alternation of si and wa. In some music notation, the si (underlined) corresponds to the sign “o”, while the wa (bold) to the sign “+”, as exemplified in the following scheme:

This metrical form allows the rest of the ensemble to reach higher tempos; for this reason, it is particularly suited to accompanying the intense spirit possession dances of the nat kadaw.

In moments of particularly fast tempos and sound intensity, the walethkout bamboo clapper substitutes the wa woodblock; the sound of the si cymbals is omitted entirely. The musician holds the walethkout with both hands, marking only the primary beats of the metric cycle.

The pat waing drum circle concentrates on the off-beats – not marked by the si and wa idiophones. As a result, it is in rhythmic contrast with the other drums in the ensemble, especially the large pat ma drum. The pat ma usually sounds on the main beats marked by the si and wa idiophones, rhythmically interacting with the drum circle. The two instruments are usually positioned next to each other in the ensemble. Metrically alternating with the drum circle, the pat ma usually marks the end of the metric-rhythmic cycle with a deeper sound – corresponding to the action of the wa/walethkout idiophone. This interlocking style allows the ensemble to reach fast tempos without sacrificing any sonic impact or volume; it also helps control the dance movements during the spirit possession dances.