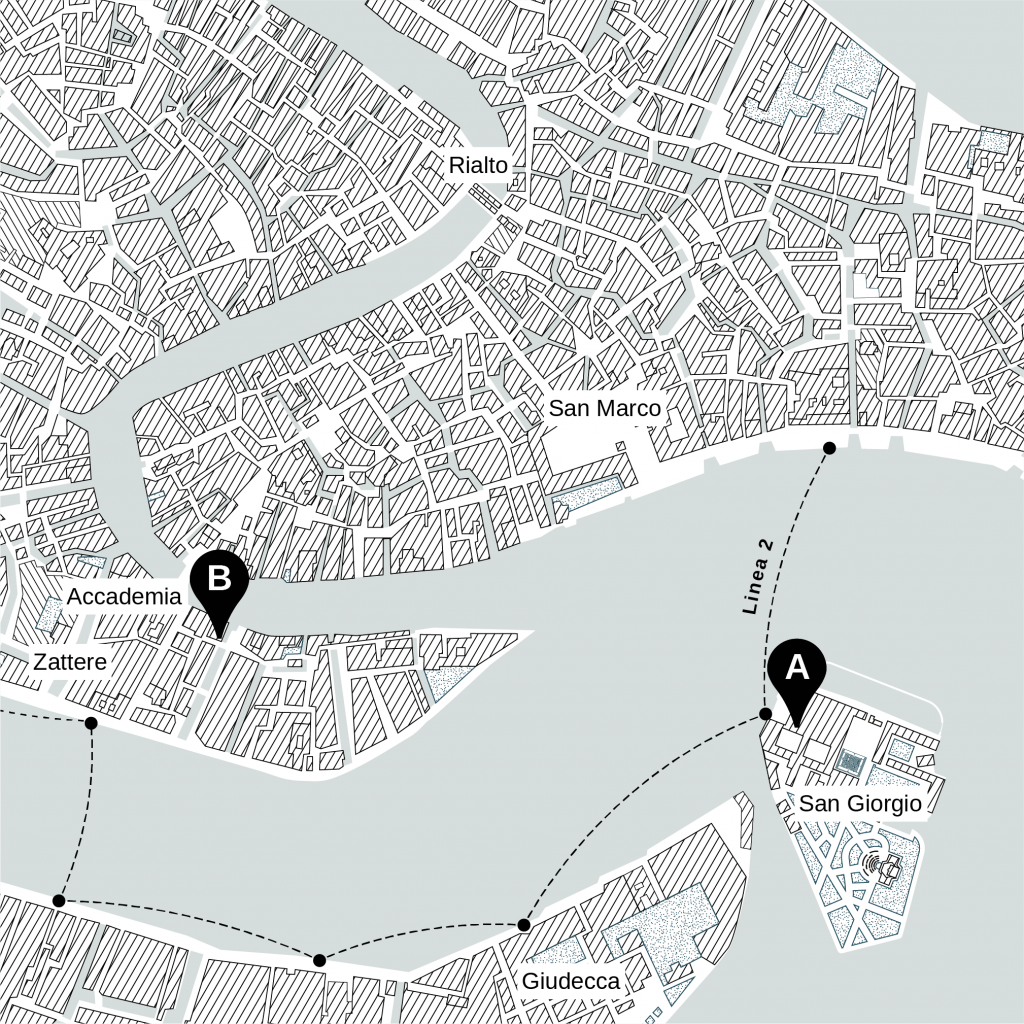 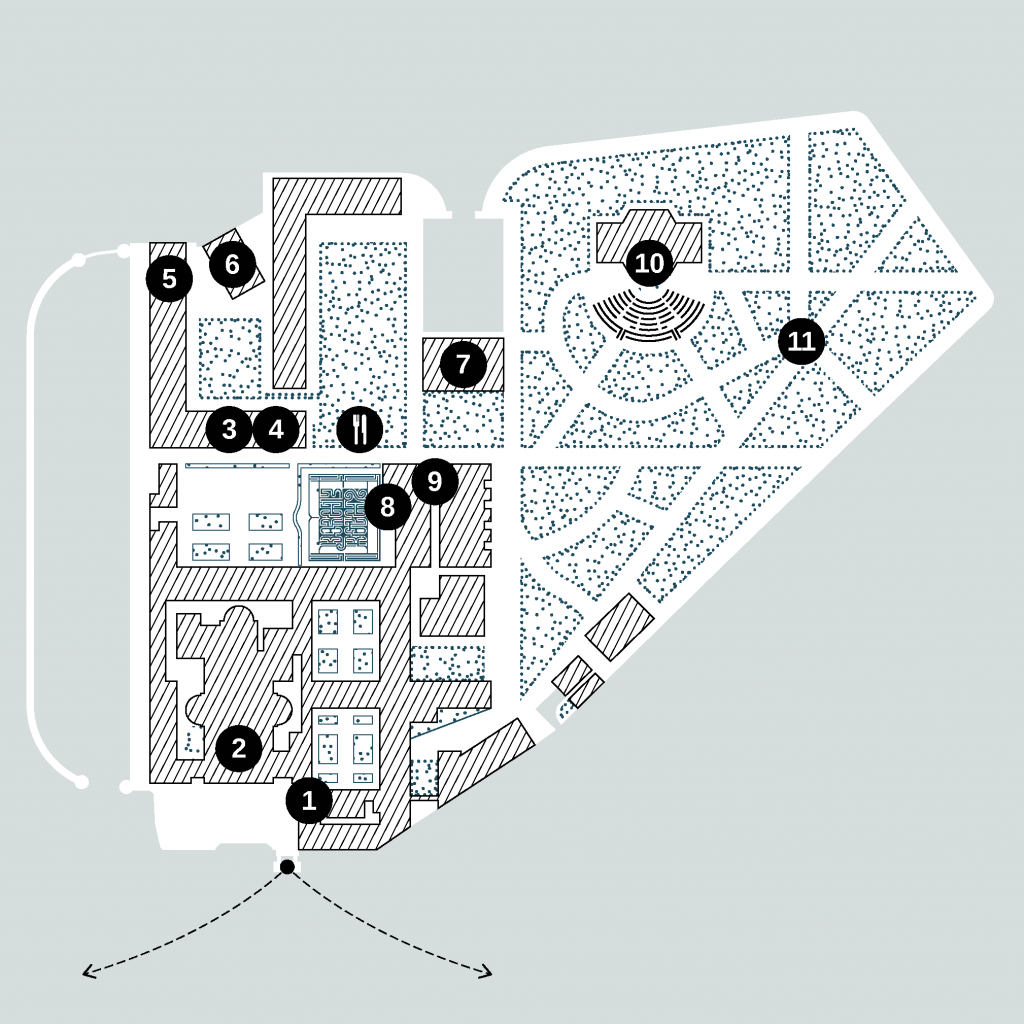 A – Island of San Giorgio Maggiore

Unique in its kind, the ex Benedictine Monastery of San Giorgio Maggiore is a historical site of great architectural and artistic prestige, thanks to the presence of works by the greatest 16th and 17th-century Italian Masters. It is venue of the Fondazione Giorgio Cini since 1951.
Discover the history of the monumental complex

The Abbey of San Giorgio Maggiore is on the on the island of the same name, in front of the St. Mark’s Basin. Part of its complex is the Church by Andrea Palladio, completed in 1610 from the architects Scamozzi and Sorella accurately following the drawings by the architect from Vicenza. It has been inaugurated, in the same year by the Patriarch Francesco Vendramin.
See the Abbazia di San Giorgio Maggiore web site

3. Le Stanze del Vetro
Le Stanze del Vetro is a long-term cultural project devoted to studying and highlighting the Venetian art of glassmaking in the 20th century. A permanent exhibition space designed to host a series of solo and group shows featuring international artists, both contemporary and historical, who have used glass during their careers as an original means of expression and a medium for researching their own personal aesthetics.
See Le Stanze del Vetro web site

4. ARCHiVe
Fondazione Giorgio Cini, Factum Foundation for Digital Technology in Conservation and the Digital Humanities Laboratory of École Polytechnique Fédérale de Lausanne (EPFL-DHLAB) are launching a new centre dedicated to technology and to the digital preservation of cultural heritage on the Venetian Island of San Giorgio Maggiore, Italy: ARCHiVe – Analysis and Recording of Cultural Heritage in Venice. The Helen Hamlyn Trust is the founding supporter of ARCHiVe.
See the ARCHiVe page

Originally a customs storehouse since 1792, these rooms became a boarding school (convitto) in 1952. In 2008, they were converted into a centre for temporary exhibitions organised by the Fondazione Giorgio Cini or in collaboration with major international
institutions.

5. Le Sale del Convitto
Originally a customs storehouse since 1792, these rooms became a boarding school (convitto) in 1952. In 2008, they were converted into a centre for temporary exhibitions organised by the Fondazione Giorgio Cini or in collaboration with major international institutions.

6. The Auditorium “Lo Squero”
The Squero Auditorium on the Island of San Giorgio Maggiore is a former boat repairs shed (squero). It was converted into a stunning modern concert hall by architects Cattaruzza and Millosevich with the support of the Interregional Office for Public Works in the Veneto, Trentino Alto Adige and Friuli Venezia Giulia, and the Fondazione Virginio Bruni Tedeschi.

7. Piscina Gandini
Designed and built in 1960, the Piscina (“swimming pool”) is a wonderfully light-filled space due to its ample glazed surfaces and steel-frame windows and glass doors.
Having recently been renovated, the Piscina is now one of the Foundation’s exhibition facilities and hosts various events, especially photographic exhibitions.

8. Borges Labyrinth and Room
The reconstruction of the garden maze that the British architect Randoll Coate designed in honour of Jorge Luis Borges (Buenos Aires, 1899 – Geneva, 1986) was installed to mark the 25th anniversary of the death of the celebrated Argentine writer, poet and essayist, in collaboration with the Fundacion Internacional Jorge Luis Borges. Adjacent to the labyrinth, the Borges Room hosts temporary events and exhibitions.

9. Branca Center Residence
Being a resident is an essential part of life at the Vittore Branca Center for the Study of Italian Culture: immersion in the cultural life on the Island of San Giorgio Maggiore and in the monumental areas of the Fondazione Cini is the fundamental prerequisite for a physical and emotional involvement enabling young researchers and senior scholars to make the most of the opportunities arising from working side by side. The Residence can accommodate up to 90 scholars in single or double rooms.
More about the Branca Center

10. Teatro Verde
Designed by architects Luigi Vietti and Angelo Scattolin and built in 1952 by recycling material left over from restoration work on the island, the Teatro Verde is a 1,484-seat amphitheatre set at the heart of the grounds on San Giorgio Maggiore.
Modelled on ancient Greek and Roman theatres, and alluding to the open-air garden theatres that adorned Venetian villas from the Renaissance to the 18th century, the Teatro Verde is made of steps of white Vicenza stone separated by boxwood hedges.

11. Foundation Grounds
The Foundation grounds form the largest private park in Venice. The original design for the redevelopment of the grounds in the 1950s consisted of a series of large flowerbeds interlocked with some of the main paths to create the pattern of accesses to the Teatro Verde, the central feature of the area. In the original design, the main paths in the grounds were flanked by regular rows of tall trees, while the internal alleys were bordered by hedges of varying heights made up of several species. The grounds have undergone several modifications over the years in an approach, however, always respectful of the vegetation’s natural growth over time.

The San Giorgio Café con Filippo La Mantia is a  combination of the passion for cooking, the love of culture and the pleasure of hospitality. The café/bistrot offers a renovated, comfortable space with an exclusive outdoor area facing onto the basin of St. Mark’s, and an atmospheric view of the quay of the Island of San Giorgio and the Riva degli Schiavoni.

B – Palazzo Cini
The Fondazione Giorgio Cini owns part of the Palazzo Cini at San Vio, which from 1919 was Vittorio Cini’s principal residence. The building is the result of merging two 16th-century palaces: one belonging to the Foscari on the Grand Canal and the other owned by the Santa Maria Formosa branch of the Grimani family. It now houses the Palazzo Cini Gallery. Since 2014, following renovation work carried out on the first and second floors with the support of Assicurazioni Generali, the permanent Gallery opens to the public for about seven months every year, and also regularly hosts exhibitions of historical and contemporary art.
Go to the Palazzo Cini site

Go to the map

How to reach us