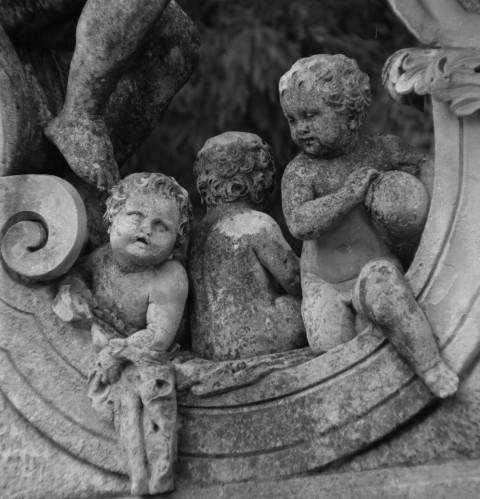 The Archive consists of 1,292 black and white photographs on glossy cardboard (18 x 24 cm) documenting the production of the Marinali and other sculptors who flourished in the Veneto in the late 17th and early 18th centuries. The collection was donated to the Fondazione Giorgio Cini in 1977 by the Vicentine photographer Giorgio Di Natale, who wanted it to be preserved in a prestigious institution.

As testified by a letter of 15 September 1977 sent to the director of the Institute of Art History, Rodolfo Pallucchini, Di Natale had conducted a photographic campaign on the Marinali as part of “my larger plan to record everything beautiful that surrounds us, as I was worried by the damage, at times irreparable, caused by the so-called consumer and mass media society, often with irreversible repercussions. My aim was not to hoard the riches for myself, but to prepare material so that it could be entrusted to people who would preserve it for posterity and or use it for the delight of all art lovers.”

The backs of the photographs all bear Di Natale’s stamp and the date 1976. They arrived in the Foundation in 21 ring albums, furnished with captions and accompanied by a small group of publications on the Marinali, which Di Natale had used as the starting point for his own work. The material was then placed in standard box files respecting the original order of the images and maintaining the captions and texts attached to the photographs.

The so-called “Marinali photographic itinerary” reconstructs the vast production of the Vicenza workshop founded by Francesco Marinali, a sculptor and woodcarver who had moved from Bassano to Vicenza in the 1760s with his sons Orazio (1643-1720), Francesco (1647-1727) and Angelo (1654-1702) – they too talented sculptors. The fame attained by the Marinali, and especially Orazio, lived on beyond the mid-18th century through the work of their heir Giacomo Cassetti. Evidence of their considerable reputation comes from the large number of commissions from beyond Vicenza, widely documented in the photographic archive. Covering the various areas of the Marinali’s production, the archive includes images of sculptures made for churches and palazzi in Vicenza, but also for villas in the surrounding countryside area: from the Villa Rotonda to the large-scale series of works for Montegalda, Montegaldella and Trissino, and the less well known groups, such as those for the Villa Piovene at Castelgomberto, where various other sculptors worked alongside the Marinali.

Di Natale also extended his search to works made by the Vicentine workshop in Treviso, Verona, Venice, Udine, Brescia and even Florence, where he went to document the sculptures in the garden of Acton’s Villa La Pietra. The archive also contains images of sculptures that ended up in Italian and foreign museums, for which the photographer often asked for specific reproductions.

The precious material featured in the photographic archive includes a series of sheets from the so-called “Marinali Album” (now in the Museo Civico, Bassano del Grappa) with drawings used in the preparatory stages in the Vicentine workshop, and a group of terracotta works from the Musei Civici, Vicenza, which were bozzetti (models) for larger scale statues.

Lastly, the archive contains photographic documentation on the production of various other artists, from the Vicentine sculptors Albanese and Giovanni, Antonio and Tommaso Bonazza, to Giusto Le Court, Enrico Merengo and Giovanni Maria Morlaiter, as well as other sculptors, to whom recent studies have attributed works previously assigned to the Marinali.