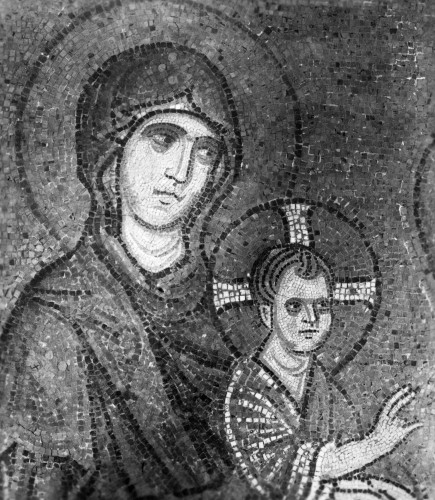 The original aim of the Institute of Art History to play a significant role in the field of studies on Byzantine and Eastern Christian Art – thanks to the good offices of the illustrious art historian and expert on Byzantine art Sergio Bettini (1905-1986) – led in the mid-1950s to the acquisition of a large photographic collection on the art and architecture of Byzantine Greece, the outcome of extensive campaigns conducted by Pericles Papachatzidakis (1905-1990). Professor Bettini met the photographer on his many trips to Greece, which continued well into the war, for the purposes of studying and collecting pictures as well as pursuing “the almost pioneering exploration of the province of the Byzantine empire”. The photographer was then contacted by the Institute in June 1955, at the prompting of Bettini, and asked to provide an initial series of photographs on some of the major Greek Byzantine monuments, including complete documentation of the mosaics in the monastery of Nea Moni on Chios. A dense correspondence, written subsequently and throughout 1956, documents the acquisition of other series of photographs, which Papachatzidakis put together to met the requests from the Institute of Art History, making a total of 4,552 photographs. The collection provides detailed exhaustive documentation of Byzantine art in the Greek-Macedonian area with a special focus on the mosaic cycles of the so-called “Macedonian and Linear-style Classicism” (9th century), such as the cycles in the Daphni monastery dedicated to the Dormition of the Virgin, near Athens, the monastery of Hosios Loukas and the monastery of Nea Moni on the island of Chios. Also well represented are the monumental complexes of Thessaloniki (frescoes and mosaics in the churches of the Holy Apostles, St Catherine, St Demetrios, and St Sophia) and Mystra (views of the town and the Kastro, the churches of Aphendiko, the Virgin Peribleptos, the Virgin Pantanassa, and the Metropolis). A particularly significant part of the collection are the late-Byzantine frescos in the complexes of Mt Athos and the Meteora in Thessaly. The 4,552 positive prints are kept in 78 envelopes according to the original topographic criterion. But 294 of them from the documentation of the monumental complexes in the city of Thessaloniki were mounted on large supports and placed in special files. As part of the project to develop the Photo Library archives and collections, a programme is being pursued to digitalise and catalogue the collection. At present, part of the material can be consulted online, i.e. the section on the Greek Byzantine monumental complexes of Daphni, Hosios Loukas and Nea Moni.

The Archive may be consulted upon appointment.