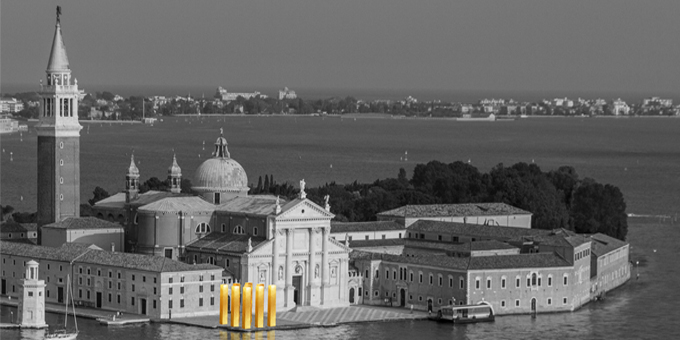 Paralleling the Architecture Biennale, nine columns—more than seven metres high and covered with a golden mosaic—stand in front of the Church of San Giorgio Maggiore, bearing the sky above them. Curated by art historian Robert Fleck, the installation The Sky Over Nine Columns offers a broad scope for association. As a manifestation of the human being standing upright, the column is the earliest element in the history of architecture and forms a direct relation between earth and sky. The golden mosaic consisting of over 800,000 tesserae is an example of the long tradition of local craftsmanship, representing Venice’s early cultural relations between Orient and Occident. The sculptural ensemble serves as an instrument of light performance, adding a widely visible source of fascination to the rich cityscape of Venice.

For more than 60 years, Heinz Mack has worked as a painter and sculptor. In 1958, he co-founded the group ZERO, an international movement with many artist friends such as Yves Klein, Lucio Fontana and Piero Manzoni. In 1970, Mack represented Germany at the 35th Biennale di Venezia with three other German artists. He has developed a genuine language of light and colour art since the 1950s and is a key protagonist of kinetic art. His works in public space – be it urban or in nature – are conceived as objects for the light. If the ideal space and the ideal light meet the interested viewer, a fascinating symbiosis may occur.

The installation The Sky Over Nine Columns is realised by Beck & Eggeling International Fine Art, Düsseldorf and Sigifredo di Canossa, in cooperation with the Fondazione Giorgio Cini. The realisation is supported by Trend, Vicenza.

We inform you that the Libraries are closed from April 20

Grant for research on Lucio Fontana, the Argentine period; monuments, projects and works

Call for applications for 6 pianists and 10 musicologists with

As a medium dealing with – and in some cases,