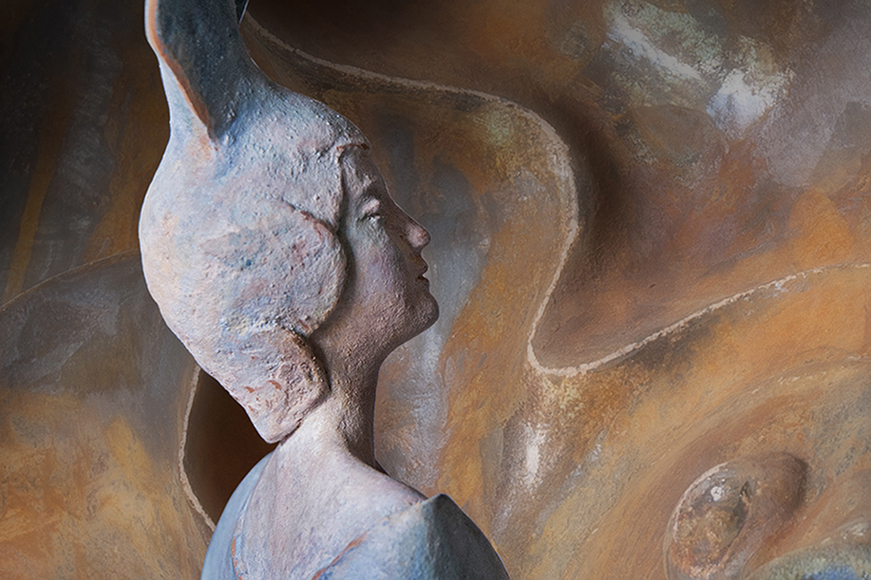 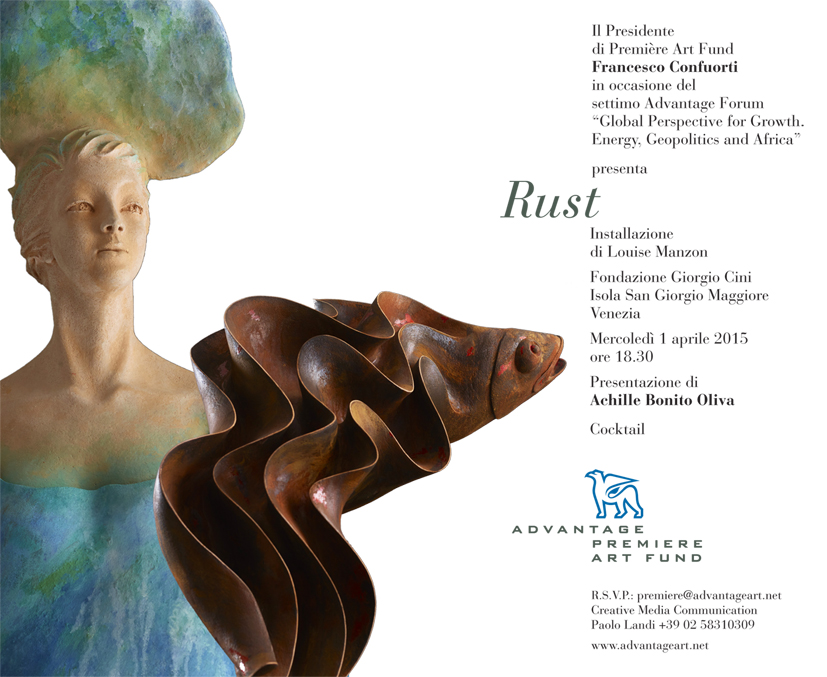 On 1 April 2015  RUST, an installation of recent sculptures by Louise Manzon, will be officially unveiled at the Fondazione Giorgio Cini on the Island of San Giorgio Maggiore. The exhibition will be open to the public from 2 April to 17 May 2015.

RUST not only as the corrosion of matter by atmospheric agents but also the tendency of a metal artefact to return to its original state, as found in nature: a rebirth and an opportunity.

The site-specific installation designed by Louise Manzon develops some of her favourite creative themes: female figures in the role of vigilant, maternal custodians of life’s secrets, sea creatures and the vital regenerative nature of the marine conditions they live in.

The female figure is Tethys, in the narcissistic image of a body rendered with great resonance… A kind of fan decorates the head of the mythological goddess. A baroque structure supports the sculptural arrangement, an all-embracing conformation that articulates the masses in the body and dress. The curved line creates the hint of an upward movement, a thrust towards aerial positions and sudden miraculous flights that free Tethis from the laws of gravity” (From the presentation by Achille Bonito Oliva).

A shoal of fish in primordial forms represents aquatic life, the power of genesis threatened by pollution and neglect. Also outside of water these phenomena threaten the vitality that the artist highlights in her works through vivid colours and shimmering forms. Modelled in terracotta, at times transfigured into an iron-like material, Louise Manzon’s sculptures evoke primordial swimming creatures, the earliest forms of aquatic life that emerged from the depths of the abyss, in timeless elegant guise. Her works restore the joy of a world that she has experienced in life and shares with us, with our myths and stories. Ancient but also very topical modern figures remind us of the importance of safeguarding the environment and the crucial relations between humanity, nature and culture.

Louise Manzon was born in São Paulo, Brazil in 1961. Raised in a cosmopolitan family, she was educated in South America, the United States and Europe. After graduating with a Master’s in Industrial Design from the Pratt Institute, New York, she furthered her studies of painting and sculptural techniques at the National Academy Museum and School of Fine Arts, New York. She has shown her sculptures in Switzerland, the United States and Italy.

Advantage Première Art Fund in an independently managed fund specialised in collectable assets, created by Advantage Financial. It mainly focuses on 20th-century and contemporary artistic production and seeks to identify emerging and innovative sectors. The work of Louise Manzon has attracted attention due to a number of elements that the Advantage Première Art Fund considers to be particularly significant: her interest in environmental sustainability, the theme of intercultural exchanges (with an emphasis on female artistic production and following the work of artists who trained in and move between various cultures) and, lastly, her use of eco-friendly art materials and techniques, respecting the environment and the most illustrious traditions.

Advantage Financial supports the Fondazione Giorgio Cini Onlus by being a member of “The Friends of San Giorgio.”

We inform you that the Libraries are closed from April 20

Grant for research on Lucio Fontana, the Argentine period; monuments, projects and works

Call for applications for 6 pianists and 10 musicologists with

As a medium dealing with – and in some cases,