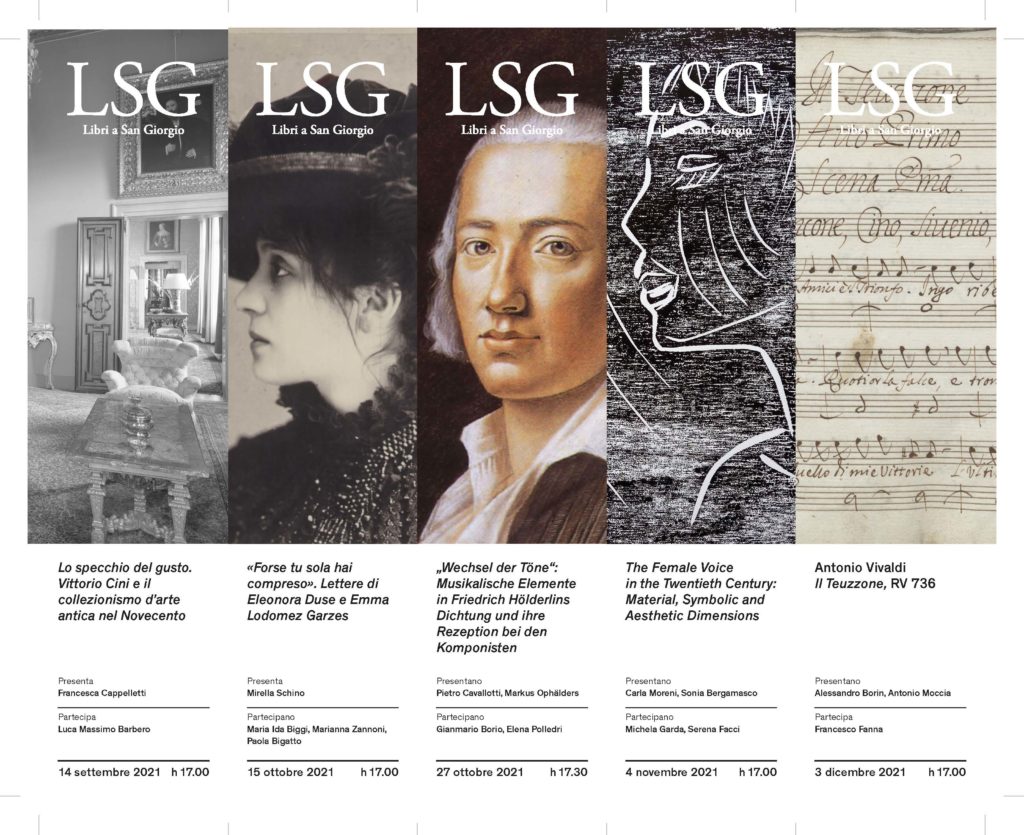 The presentations of new books published by or associated with the Fondazione Giorgio Cini resumes on 14 September with Lo specchio del gusto. Vittorio Cini e il collezionismo d’arte antica nel Novecento, edited by Luca Massimo Barbero and published by Marsilio. The book contains the proceedings from a conference held on San Giorgio in 2017, devoted to Vittorio Cini as a highly refined patron of the arts and historic art collecting in the 20th century.

On 15 October, the featured book will be “Forse tu sola hai compreso”. Lettere di Eleonora Duse a Emma Lodomez Garzes, edited by Marianna Zannoni and published by Marsilio. The book consists of 350 letters from the great diva to her friend Emma Lodomez Garzes. Previously unpublished, this correspondence arrived in the Fondazione Cini in 1977 and is now in the Duse Archive in the Institute of Theatre and Opera.

On the third date, 27 October, there will also be a concert at the Squero Auditorium to accompany the presentation of „Wechsel der Töne“: Musikalische Elemente in Friedrich Hölderlins Dichtung und ihre Rezeption bei den Komponisten, edited by Gianmario Borio and Elena Polledri and published in Heidelberg by Winter in 2019. The book brings together the results of a multi-year project carried out at the Fondazione Giorgio Cini on the relationship between Hölderlin’s poetry and its musical reception by 20th-century composers.

On the third date, 4 November, the seventh volume in the “Musical Cultures of the Twentieth Century” series will be presented: The Female Voice in The Twentieth Century: Material, Symbolic and Aesthetic Dimensions, edited by Serena Facci and Michela Garda and published by Routledge. This book is the result of a research project whose aim is to offer theoretical perspectives on the voice developed from the analysis of cases in various contexts of vocal practices: opera, experimental
composition, performance art, jazz, popular music and folk revival.

Lastly, on 3 December, the featured book is a volume in the series entitled “The Critical Edition of the Operas of Antonio Vivaldi”: Il Teuzzone in a critical edition by Alessandro Borin and Antonio Moccia, published by Ricordi. The collected edition of operas by Antonio Vivaldi thus gains a new volume that brings to completion the diptych written by the “Red Priest” for Mantua. Premiered during the last days of 1718, the opera preceded by a few months the production of Tito Manlio, RV 738.