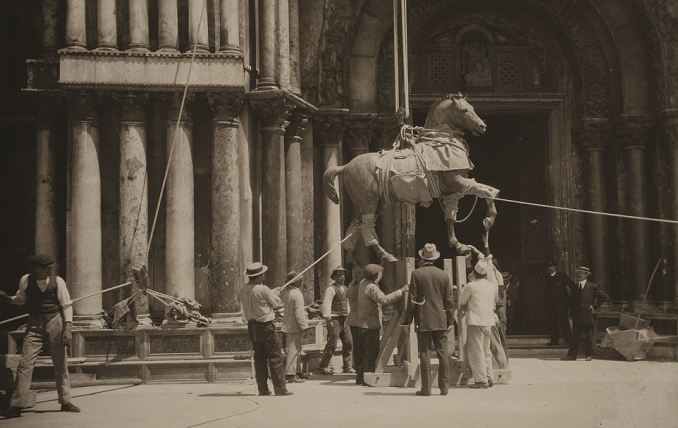 Safeguarding Monuments during the Great War. The Ugo Ojetti Photographic Collection in the Fondazione Giorgio Cini

A leading figure on the Italian cultural scene in the 20th century, Ugo Ojetti was an eclectic journalist, art critic and writer, whose multifaceted personality certainly eludes any straightforward classifications. A perennial enthusiast of things beautiful in his writings and a strong character, he successfully described the complexity of cultural and political changes in the intricate historical period from the late 19th century to the Second World War. Ojetti volunteered for the First World War and was a sub-lieutenant in what was then the Royal Italian Army, whose mission was to protect the monuments in the Terre Redente (Liberated Territories). This was a circumscribed period in his career, when he had to deal with the requirements of the historical heritage organisations, orders from the Army Supreme Command and the fragility of the material threatened by the destruction of war. During this period he collected many photographs to document the damage caused by enemy bombing of Italian monuments in the regions of Friuli Venezia Giulia, the Veneto and Trentino. He was also involved in the operations to safeguard works of art conducted by the Italian army, especially in Venice.

The Institute of Art History archives preserve the photographic collection that Ugo Ojetti put together during the Great War. It consists of more than 500 photographs (gelatin and albumen prints) taken from 1915 to 1919. The varied provenance of the photographs is evidence of the dense network of relations that Ojetti created during the war in order to put together detailed documentation, also to be used for propaganda purposes.

To mark the celebrations of the centenary of the Italian entry into the Great War, the Institute of Art History is staging an exhibition from 9 June to 31 July in the spaces of the Nuova Manica Lunga. The selection of photographs from this fascinating collection not only illustrate the damage suffered by cities during the First World War and the operations to safeguard the historical Italian art heritage but also provide an opportunity to reflect on the role of photography as a vehicle for spreading ideas.

Before the official opening of the exhibition on 9 June, Marta Nezzo from the University of Padua will give lecture in the Sala Barbantini at 5 pm.