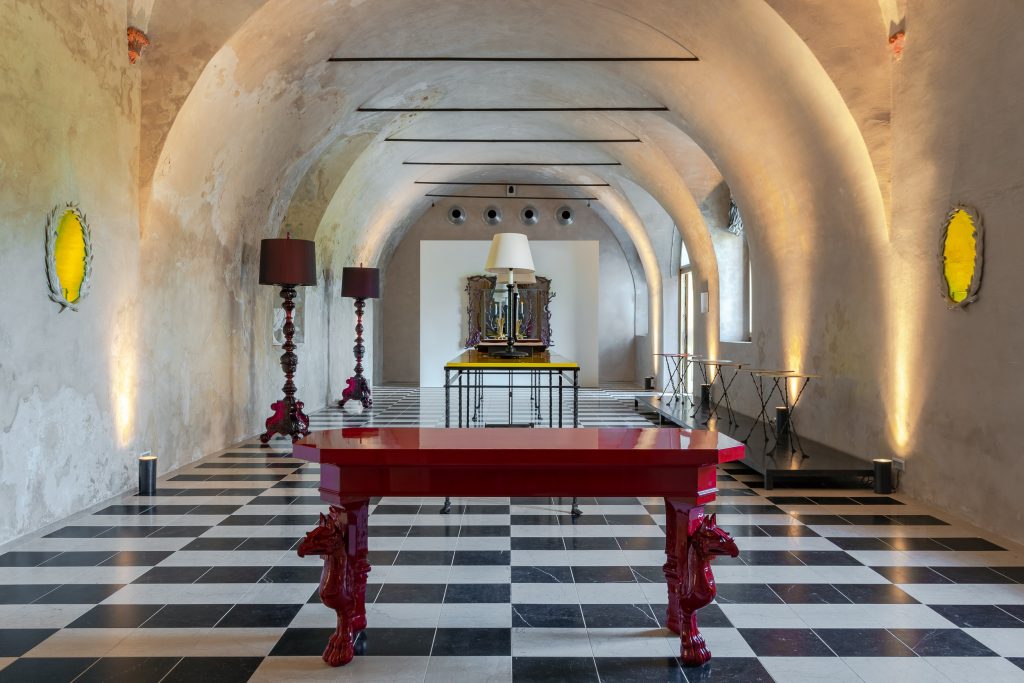 Invincible Truth is an exhibition, curated by Lars Rachen and Paolo Vincenzi, London based artist and designer Marianna Kennedy, specially conceived for the Sala Borges of the Fondazione Giorgio Cini, on the island of San Giorgio Maggiore in Venice. The exhibition will be open to the public free of charge from Sunday September 1 to Sunday September 22, 2019.

The project arose and has taken shape as a creative dialogue with the spaces dedicated to Jorge Luis Borges at the Fondazione Giorgio Cini and with the city of Venice, which together form an ideal setting for the presentation of a series of past and recent works by the artist, including two completely new and very special creations that give the exhibition its title. They are two large-format Artist Books made by traditional techniques that through the exploration of emblematic and alchemical themes and images represent a contemporary catalogue of Marianna Kennedy’s imagination. “By looking to the past she creates works that speak of the present and will endure into the future,” wrote Rupert Thomas in the introduction to the exhibition’s catalogue.

The exhibition’s title, “Invincible Truth”, alludes to an emblem representing Veritas Invicta contained in Choice of Emblemes, a book published by Geffrey Whitney in 1586 which brought to England the great continental tradition of the emblem book embodied by Andrea Alciato, 16th-century jurist and author of the Emblematum Liber, a gallery of human situations turned into metaphors that was intended to pass on a fund of wisdom and morality, partly through recourse to the efficacy of the iconographic medium.

Marianna Kennedy has created the two large-format Artist Books by combining printing techniques with original drawings reproduced on typographic plates and magnificent contemporary bindings that echo the classic Venetian style. They will be displayed on two large lacquer and bronze tables that deliberately recall the ones in the Fondazione Cini’s splendid library, designed by Longhena, from which the artist has drawn inspiration.

At the heart of the exhibition, the two volumes find a natural echo in the celebrated Borges Labyrinth, onto which the room in which they are displayed faces: designed by Randoll Coate, who took his inspiration from the story “The Garden of Forking Paths,” the maze presents the appearance of an open book, strewn with the symbology to be found in the Argentinian writer’s works, just as “Invincible Truth” opens up a view of the creative imagination of Marianna Kennedy.

The two volumes are presented in a setting made up of objects produced by the artist: the visitor will be able to admire plaster vases with inserts in polychrome Murano glass; carved mirrors with mercury glass mirrors, infused with color; guéridons made of bronze and Chinese lacquer; fire gilded bronze candelabra and monumental resin lamps.

For over twenty-five years, Marianna Kennedy has been working in the East End of London, creating at her studio/home in Spitalfields an extremely limited number of pieces of artistic design, each of which is the result of months of collaboration with some of the best craftsmen and artisans in the UK. Known and appreciated internationally, her works can be found in important private collections. This artist’s use of traditional techniques has always gone hand in hand with a highly contemporary view of aesthetics. “Harking back to the past, Kennedy seeks—as in the vision of Carlo Scarpa—to give new vigor to historical models by creating works that can ‘live today and tomorrow,’” declare Lars Rachen and Paolo Vincenzi, curators of the exhibition.

As characteristic of her creative practice, for the exhibition at the Fondazione Cini, Kennedy has embarked on collaborations with significant local exponents of the applied arts, and in particular with some master glassblowers of Murano and the Officina fabbrile Zanon. Many of the works in the exhibition will be placed on supports made by the Zanon brothers, some of which have been designed by the artist while others are based on historic designs by Carlo Scarpa, originally intended for the Gallerie dell’Accademia and the Gipsoteca in Possagno.

The profound enchantment with Venice that is reflected in the work of the Canadian artist stems in part from her daily contact with one of the principal examples of the Palladian style in early 18th-century England, Nicholas Hawksmoor’s Christ Church in Spitalfields, which stands next to her studio.

The exhibition will be documented by a catalogue with an introduction by Rupert Thomas.

A special collection of candelabra, made out of resin in colors studied especially for this Venetian exhibition and inspired by the colors of Murano glassware, will be on sale in the foundation’s bookshop.

Contacts for the press