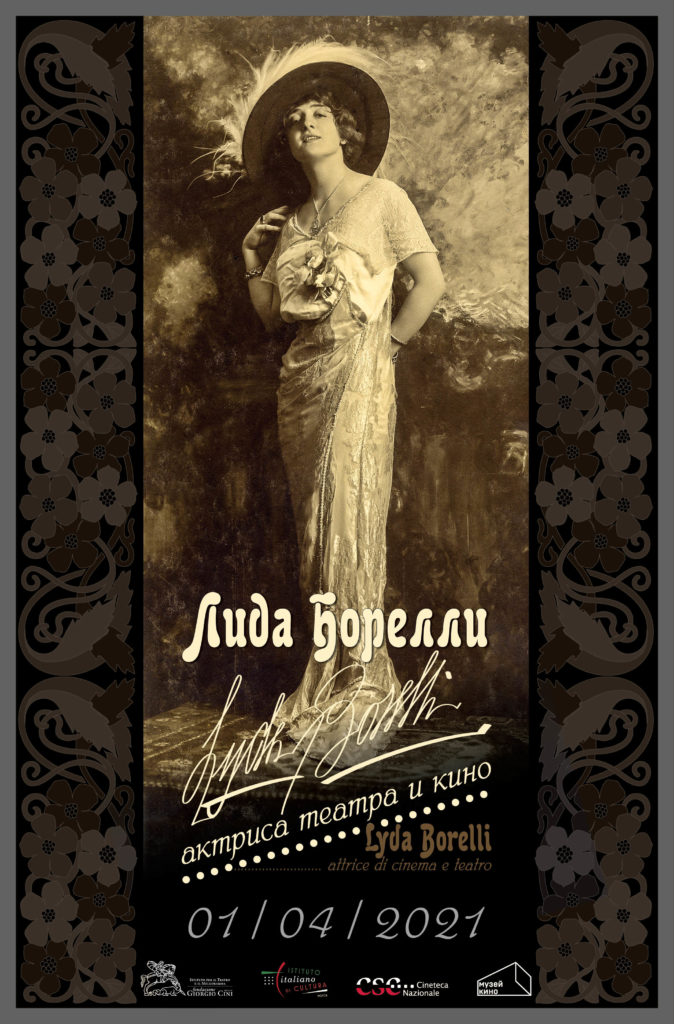 On 1 April 2021, at 6.30 pm, the Moscow State Central Film Museum, the Italian Cultural Institute in Moscow and the Fondazione Giorgio Cini Institute of Theatre and Opera will unveil the international project Lyda Borelli – film and stage actress.

On 31 March 2021, the Moscow State Central Film Museum will celebrate its anniversary, which, however, this year falls on a Wednesday, the museum’s weekly closure day. The following day, therefore, 1 April, will see the official opening of the exhibition Lyda Borelli – film and stage actress, curated by Maria Ida Biggi and Marianna Zannoni, and held in collaboration with the Fondazione Giorgio Cini Institute of Theatre and Opera and the Moscow Italian Cultural Institute.

The exhibition tells the story of the artistic career of one of the most fascinating Italian actresses of the early 20th century. The specialists from Institute of Theatre and Opera, with the support of Lyda Borelli’s descendants, continue to study and preserve the diva’s legacy. This exhibition is the result of a long research process that led to the publication of the monograph Il Teatro di Lyda Borelli, edited by Maria Ida Biggi and Marianna Zannoni (Fratelli Alinari, Florence, 2017). The materials for the exhibition were provided by various Italian institutions: museums, theatres, libraries and archives.

Lyda Borelli was born into a family of actors in 1887 and began acting on stage as a child. She belongs to the generation immediately after the great Eleonora Duse. At various times in her career Lyda was a member of the companies of directors Ruggero Ruggeri and Ermete Novelli, and performed in theatres in various Italian cities. Borelli starred in plays by leading modernist playwrights, such as Gabriele D’Annunzio and Oscar Wilde, as well as in films (she has a filmography of  around fifteen films from 1913-1918). Her circle of friends included the most brilliant Italian authors and intellectuals of the first quarter of the 20th century, and she was portrayed by leading period photographers.

Lyda Borelli had a busy long life both on and off stage. After her marriage to Count Vittorio Cini in 1918, she retired from theatre and films to devote herself entirely to her husband and children.

The Lyda Borelli – film and stage actress exhibition is the result of renewed collaboration between the Moscow State Central Film Museum and the Italian Cultural Institute in Moscow, begun a year ago during the preparations for an exhibition celebrating the birth centenary of Federico Fellini.

The presentation will end with the film La memoria dell’altro (also known as The Memory of Another) starring Borelli and restored by the Cineteca Nazionale, Rome. The film will be screened with the musical accompaniment of pianist Philip Cheltsov.