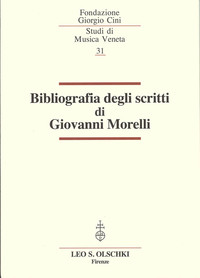 Edited by Paolo Pinamonti with a recollection by Mario Messinis

It is large catalogue with over 400 bibliographic entries on books, essays, reviews, musical editions and encyclopaedia entries (always with striking titles), enables the reader to chart chronologically the gradual evolution of the research interests of Giovanni Morelli, one of the most restless and original musicologists in the second post-war period, and not only in Italy. Evidence of his very broad approach to the musicological disciplines, both from a chronological and methodological point of view, are his many varied works on Venetian Baroque musical theatre, the history and reception of opera and more recently, Neoclassicism in music.

The entries also deal with his editions of scores (from Cavalli to Cimarosa and Verdi), his studies and monographic essays on Jean-Philippe Rameau, Jean-Jacques Rousseau and Metastasio, and on 20th-century European music and composers (Nono, Casella, Kurtág, Virgil Thomson and Gertrude Stein, Malipiero and Nino Rota) as well as his research into Veneto popular music. This constant passionate intense work was accompanied from 1985 by his direction of the newly founded Institute of Music at the Fondazione Giorgio Cini, and the work of making the most of the considerable 20th-century music archives held by the Foundation, and still the subject of enquiry by a new generation of musicologists who have been careful to follow Morelli’s great example.

The Istituto di Storia dell’Arte of the Fondazione Giorgio Cini,

This travelling advanced course for young artists starts from a

Former Director of Institutional Affairs of the Venetian foundation, she

We inform you that the library services will be suspended

From 29 June, after booking online, users will be able