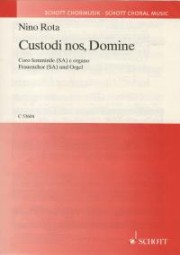 Music and critical editions of Music
By Music

The sacred hymn Custodi nos, Domine is part of that large section – 24 catalogue numbers – of Nino Rota’s choral catalogue which, together with works on a grand scale from the point of view of the musicians employed and the effort demanded of them, includes technically easier pieces like this, meant to be performed also by small amateur groups, such as church choirs. Built on a circular structure, the hymn develops at a fast confident pace in two melodic lines forming a backbone, which then undergoes various changes of tonality. This latest volume is a further step forward in the publication of Rota’s complete works – an ambitious project which the Giorgio Cini Foundation and the publishers Schott Music have been working on for fifteen years.