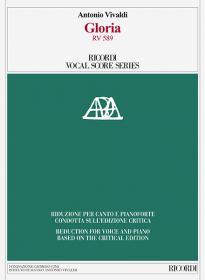 Reduction for voice and piano

Who does not know Vivaldi’s Gloria, RV 589, a favourite concert work for choirs ever since Alfredo Casella brought it back to life in 1938? Its consistently high level of inspiration, its variety of expression and its dynamism suffice to account for its perennially high reputation. This Gloria is almost a paradigm of all that is revolutionary in Vivaldi’s musical language. Even though it has been edited countless times since its modern revival, there is still more to discover in it. The Introduction and Critical Commentary for this vocal score, closely based on the Critical Edition edited in 2002, shed light on this masterpiece’s complex, and still not completely clear, origins.