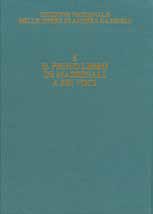 The present critical edition is based on the two editions of Il primo libro de madrigali a sei voci published in Venice in 1574 and 1587. The editio princeps, dedicated to the Bolognese Maecenas Giovanni Saraceni, includes eighteen madrigals, the first of which – in praise of the dedicatee – has been replaced in the reprint by two six-voices madrigals previously published in the Secondo libro di madrigali a cinque voci (1570). The Preface to the volume provides brief historical and stylistic notes on the nature of the relationship between Gabrieli and the Saraceni family, some information on the Venetian literary circles in which the lyrics set to music in this collection have been conceived and some basic observations on the models that may have influenced some of the musical choices of Andrea Gabrieli. The Critical Commentary provides a bibliographical description of the editio princeps (only two complete copies survive in the Landesbibliothek und Murhardsche Bibliothek der Stadt, Kassel and the Bayerische Staatsbibliothek, Munich), a bibliographical description of the posthumous reprint (four complete copies) and a chronological list of the sources with concordances, which include spiritual contrafacta and diminuted versions of some compositions included in this collection (including the celebrate treatise Il vero modo di diminuir […] by Girolamo della Casa, whose exemplifications are printed in Appendix to this volume).