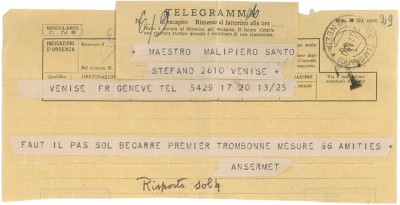 Organised by the Fondazione Cini Institute of Music and the Fondazione Ugo e Olga Levi, Venice and coordinated by Paolo Dal Molin (in collaboration with the Fondazione Archivio Luigi Nono and the Universities of Cagliari and Calgary), this symposium aims to strengthen and promote closer interaction between the institutions concerned, starting from a comparative discussion on activities dedicated to correspondence between musicians, and especially composers. From 27-28 June 2014 representatives from the principal European archives housing the 20th-century musical heritage will gather in Venice: the Arnold Schönberg Center, Vienna (Austria), the Muzička Akademija, Zagreb (Croatia), the Département de la Musique della Bibliothèque Nationale de France, Paris (France), the Akademie der Künste, Berlin and In-ternationales Musikinstitut, Darmstadt (Germany), the Fondazione Archivio Luigi Nono and the Fondazione Giorgio Cini, Venice, the Fondazione Isabella Scelsi, Rome, the Bibliotheka Universytecka w Warsawie (Poland), the British Library, London (UK), the Bartók Archives at Hungarian Academy of Sciences, Budapest (Hungary) and the Paul Sacher Stiftung, Basel (Switzerland). The first two sessions – Conserve, describe, make accessible and promote the correspondence of composers – will establish the state-of-the-art of archive processes applied to letters. In the third session, Publishing composers’ letters, three case studies will be presented on the relationship between research and accessibility of sources in publishing correspondences. The examples will be illustrated by the editors of correspondences that have been innovative in academic and editorial terms: Claude Debussy. Correspondance (Gallimard 2005), Briefwechsel Arnold Schönberg – Alban Berg (Schott 2007) and L’epistolario Helmut Lachenmann – Luigi Nono (Olschki 2012). In the final session, Towards a Network, the discussion introduced by Friedemann Sallis (University of Calgary) will shed light on the present and future of collaboration and interaction between archives for several purposes: meeting the needs for increasingly less compartmentalised studies; spreading and extending to the wider Europe good practices for the conservation and use of music documents produced from the late 19th century on; and highlighting priorities and joint perspectives.

In this sense, a key moment at the symposium conference will be the visit to the exhibition of correspondences between musicians whose archives are kept in the Fondazione Giorgio Cini. Curated by Angela Carone and Francisco Rocca, the exhibition will run from 27 June – 31 July