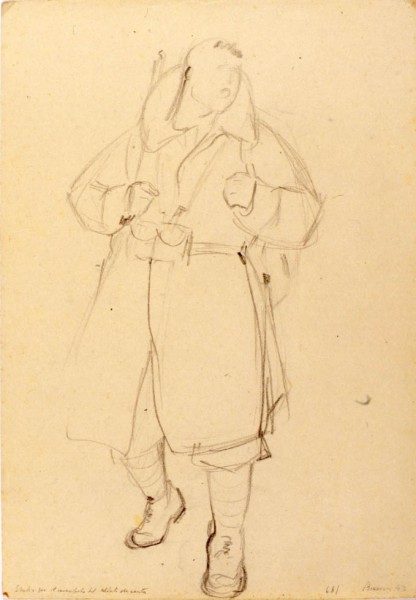 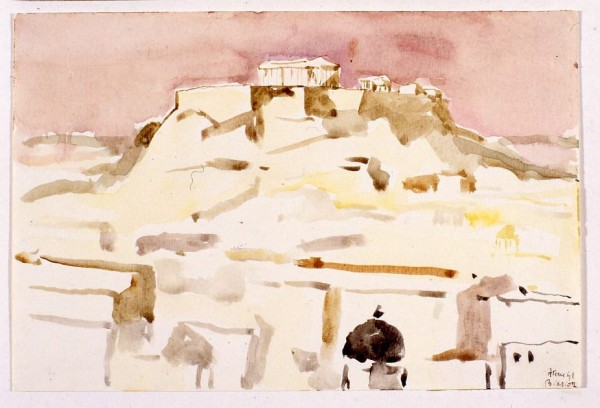 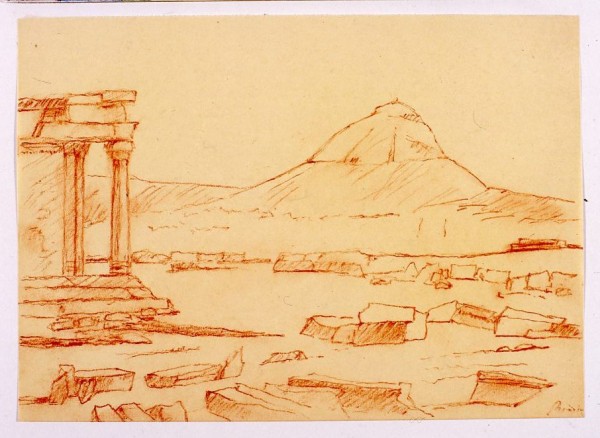 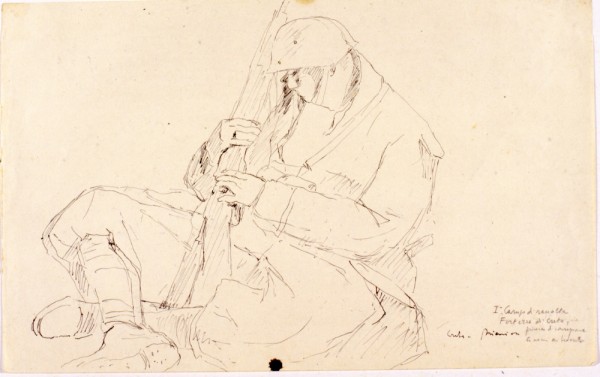 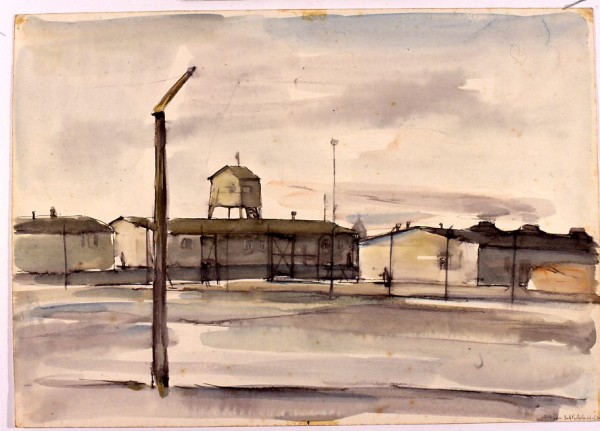 The Biasion Collection consists of seventy-three drawings, made by the painter and writer Renzo Biasion (Treviso, 1914 – Firenze, 1996) in the years when he was involved on the war front, first as an infantry lieutenant during the Italian campaign in Greece (1940-1941), and then as a prisoner, deported to Germany and Poland. The overall time span is from 1941 to 1944.

These drawings are the only works that the Treviso painter was able to save during the war and in 1989 he personally presented them to the Giorgio Cini Foundation. The images of soldiers on the front, caught suspended in time by rapid sketches with pen and pencil, reveal a compassion for his fellow human beings and the sacredness of life itself. They are interspersed with portraits of Cretan children, men and women, whom he encountered on those days in which he was oppressed by “the boredom of never-ending waiting, in time that doesn’t flow” (Biasion, Tempi Bruciati, 1948). His landscapes of the island of Crete are equally intense and suggestive: views of cities, coastlines, ports and countryside including the very striking watercolour entitled “Athens Zone of Angels”, where the Acropolis seems to dissolve in rapid strokes of light-coloured hues evoking the variations in Mediterranean light. Lastly, he also depicted the dramatic days of imprisonment in the concentration camps of Meppen, Biala Podlaska and Nuremberg in drawings and watercolours (1943–1944): in black drawn frames, heightening the desperate greyness of the lagers, the hues become darker and more material as they take on an expressionistic feel.

In 2004 a exhibition promoted by the Institute of Art History entitled Memories of War and Prison: Renzo Biasion’s Drawings from the Giorgio Cini Foundation was held in the Palazzo Cini Gallery at San Vio. Published on that occasion the catalogue is divided into four thematic sections: the Greek Albanian front, Continental Greece, Crete, and imprisonment at Meppen, Biala Podlaska and Nuremberg.

“Yesterday I started drawing. Sitting on the ground, I tried to capture this atmosphere of the camp, so desolate. The line of poles, the watchtowers, the putrid grey of every last thing. That sense of rot and remnants that reigns everywhere and restless, wheeling shadows, as if in search of findable things. And the sky is so low, so heavy, that it almost crushes the huts. And the feeling of bare, unending countryside outside. The boredom of never-ending waiting, in time that doesn’t flow and of immense distance. I tried to capture this by emphasising the row of poles with the watchtower in the background and fill the drawing with bent, cold shadows, all of them the same – so as to render the dull monotony of desperation. But I didn’t achieve my aim and so I ripped up the drawing even before I finished it” (Renzo Biasion, note, 1 November 1943).

Renzo Biasion was born into a Venetian family in Treviso, where he attended evening drawing classes. In Venice he then graduated from art high school and frequented the studio of the painter Juti Ravenna, where he saw drawings by Pio Semeghini and Filippo De Pisis. In the years immediately prior to the Second World War, Biasion began teaching drawing in technical schools in Feltre (Belluno) and, at the same time, worked on his first paintings; in 1939 and 1940, he took part in collective shows at the Opera Bevilacqua la Masa, Venice. After being called to arms, he was sent as a lieutenant to the Greek-Albanian front and subsequently the island of Crete. After the liberation of Italy on 8 September 1943, he was deported to Holland, Poland, and lastly Germany.

The artist left an account of those years in two books: Tempi bruciati (1948) and Sagapò (1953), the latter was the inspiration for Gabriele Salvatores’s prize-winning film Mediterraneo. He also made a large number of drawings (the only surviving ones were the group presented to the Giorgio Cini Foundation). After the war, he continued teaching, while he also began a very busy period as a writer and journalist.

In 1953 Biasion held an important solo show at the Galleria La Bussola. From 1957 to 1971 he lived in Bologna and the region of Emilia. These were crucial years for his development as an artist and he worked constantly on painting and engraving, especially etching; he also wrote art criticism. The artist’s favourite theme at that time was the urban peripheries and suburbia “which became an occasion for expressing a feeling of existential anguish” in which city outskirts became “an urban space in which to look towards the city; the antithesis of the centre, the chaotic pulsing heart of the metropolises”; this theme was followed by a series of “red houses”, in which Biasion explored the landscape around Bologna “which not even the Bolognese knew” and a series of “Nights” – “arguably the projection of the psychological crisis artist, who was plunged back into his immediate postwar the mood. The black background, however, is not anguishing, because the paint is so very finely and delicately applied, and in the well-calibrated spaces and exact geometries of the foreground he placed familiar, cherished objects – a book, a vase of dried flowers, an easel, a canvas, a brush and a rag.” In the 1970s he began the series of watercolours called Mediterranean Notebooks, which features some Italian localities discovered on his travels. In 1989 he presented the only surviving drawings from Second World War years to the Cini Foundation. He died in Florence in 1996.