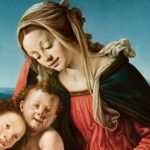 The creation of the Institute of Art History in 1954 entailed the need to endow the Giorgio Cini Foundation with collections to support, complement and develop research activities. The initial acquisitions were associated with the founder Count Vittorio Cini, considered one of the great 20th-century Italian collectors and celebrated for his very rich art collection, distributed in various historical residences, such as his palace on the Grand Canal and Monselice Castle. The various bequests that arrived in the early 1960s consisted of the series of Flemish and French tapestries, the collection of Renaissance Venetian maiolica, 16th- and 17th-century furnishings, a series of illuminated cuttings (miniatures and initials) that once belonged to the bookseller and publisher Ulrico Hoepli, antique illustrated books and some large format paintings that could finally be exhibited thanks to the spaces of the monastery, such as the altarpiece of The Annunciation by Lorenzo Costa, once in Mantua, and an oil and canvas by Carletto Caliari from the church of San Nicolò del Lido acquired by Cini from a New York fine art dealer. In addition to Vittorio Cini’s donations, the Foundation’s early years of life were characterised by the acquisition of paintings, sculptures and antique furniture on the art market, mainly for the purpose of furnishing the renewed, prestigious headquarters in the Benedictine monastery on the island of San Giorgio. In the 1960s, however, a new policy of wider-ranging acquisitions also guided by academic research interests was introduced. The policy aimed at creating a uniform artistic patrimony also associated with studies was launched in the field of drawings, especially from the Veneto and Emilia, which were the subject of a number of major exhibitions. The key year was 1962, when the Foundation took possession of the collections once owned by Giuseppe Fiocco, Antonio Certani, Elfo Pozzi and Daniele Donghi. This group of collections was to form the core of the newly created Drawings and Prints Cabinet, which was gradually enhanced over the years by further acquisitions in the field of both historic art – e.g. the album of caricatures by Antonio Maria Zanetti the Elder, the Firmin Didot edition of the corpus of etchings by Giambattista and Francesco Piranesi, series of etchings by Hogarth and Bartolozzi – and 20th-century art, including the Neri Pozza donation, the drawings of Renzo Biasion and Felice Carena, and a large collection of watercolours and tempera works by Carlo Dalla Zorza. It was one of Count Cini’s daughters, Yana Cini Alliata di Montereale, who was responsible for the most important and prestigious additions to the Foundation’s art collections. In a deed of 1981, she donated a wing of the Palazzo Cini (formerly Palazzo Grimani) and a carefully selected group of art works from her father’s collection. They include a series of 13th-. to 16th-century paintings (with genuine masterpieces by Giunta Pisano, Lorenzo di Nicolò, Filippo Lippi, Beato Angelico, Sandro Botticelli, Piero di Cosimo and Jacopo Pontormo), valuable mediaeval wooden sculptures and refined decorative art objects, from Venetian enamels to French ivories, cassoni with marquetry, 18th-century porcelain, Persian rugs and Murano glass chandeliers. The Cini Alliata donation paved the way to the creation of the Palazzo Cini Gallery at San Vio in 1984. This house-museum can be described as an historical reconstruction and suggestive, methodical description of Vittorio Cini’s tastes and collecting interests. Among the more recent arrivals are Alberto Gianquinto’s La ventata, a large canvas representative of 20th-century Venetian art, presented by the painter’s family, and a series of photographs featuring cityscapes of Rome and Paestum, taken by the celebrated Milanese photographer Gabriele Basilico.   Art Collections: Palazzo Cini Gallery Dipinti Antichi Drawing and prints Rare books Illuminated manuscripts Sculptures Contemporary Art Tapestries Majolicas Forniture Musical instruments