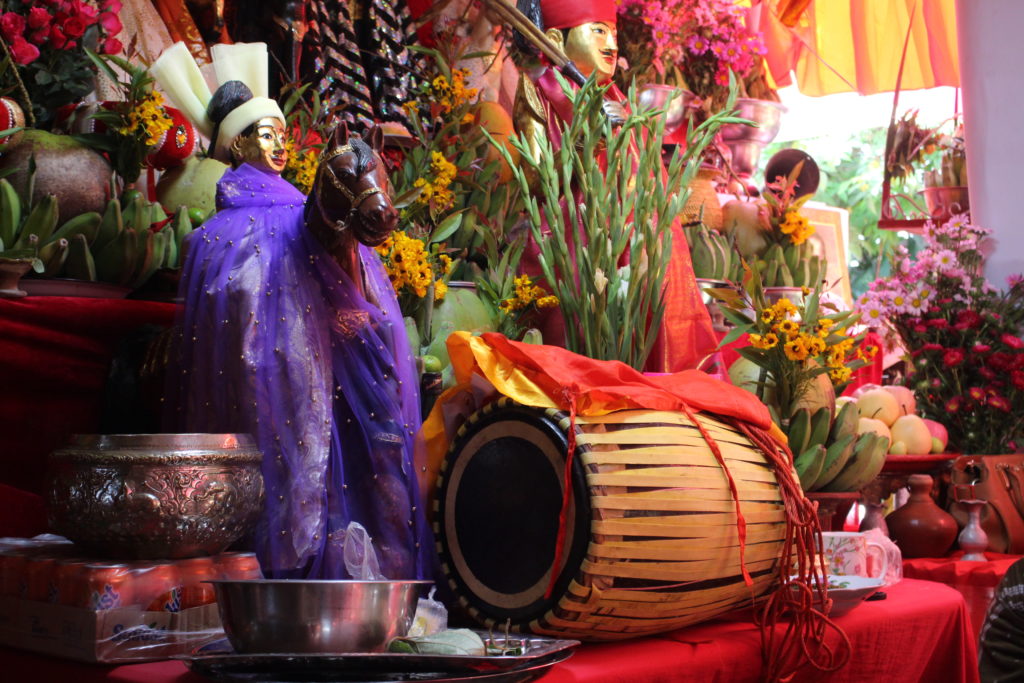 Fig. 0.1 A detail of the private altar of a nat kadaw. Fruit, flower and drink offerings (and in this case, musical instruments) are arranged in front of the spirit images, to be used during the ceremony. Yangon, 2017. 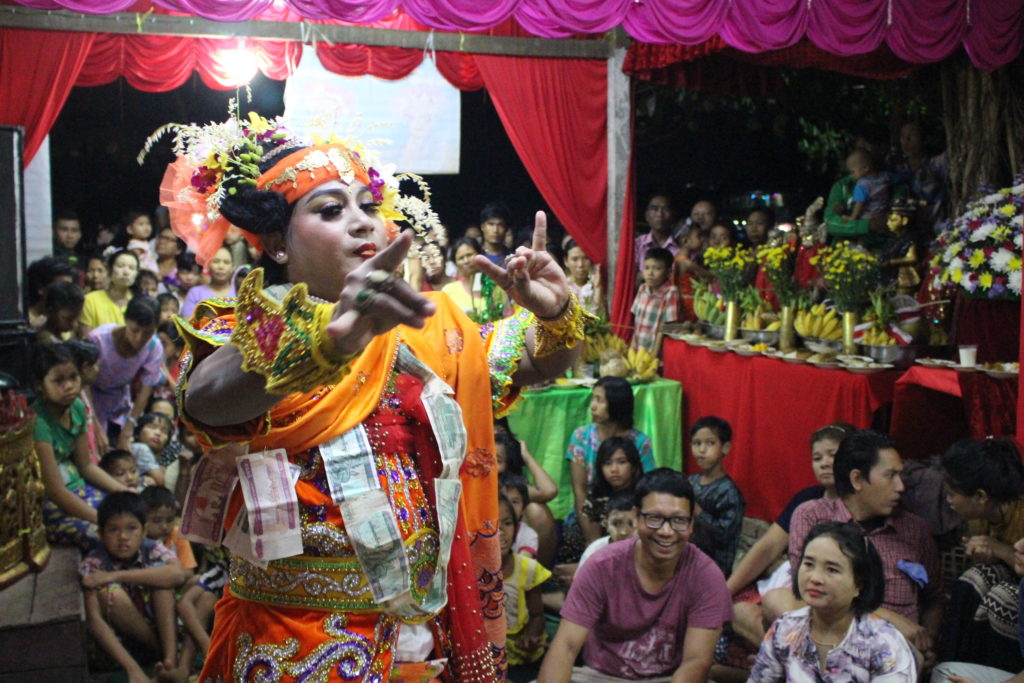 Fig. 0.2 A nat kadaw dancing for the spirits, performing a typical hand gesture indicating the royal descendance of the nat invited to join the celebration. The devotees seated around the dancer, inside the ritual area; passers-by and onlookers remain outside. Yangon, 2017. 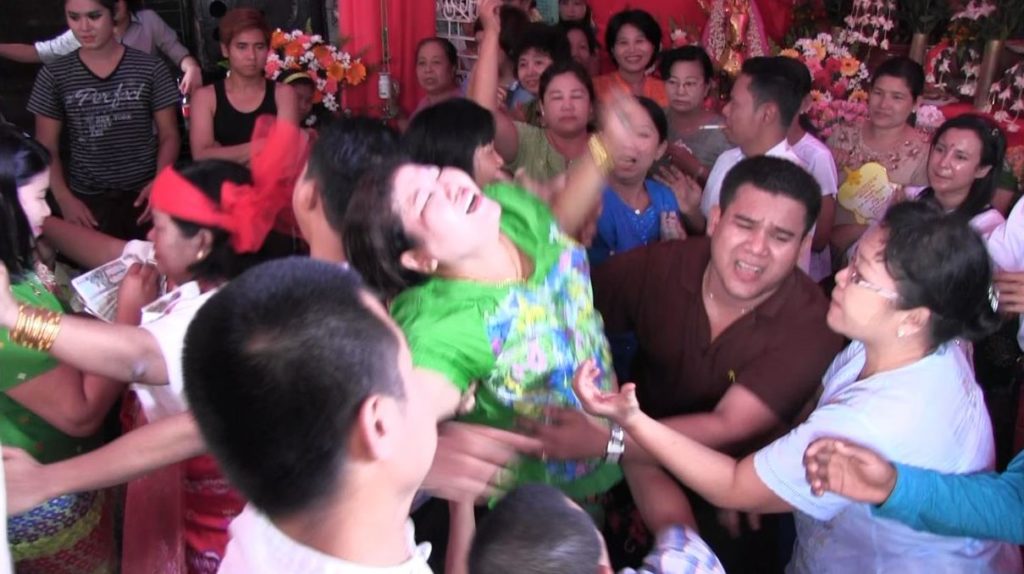 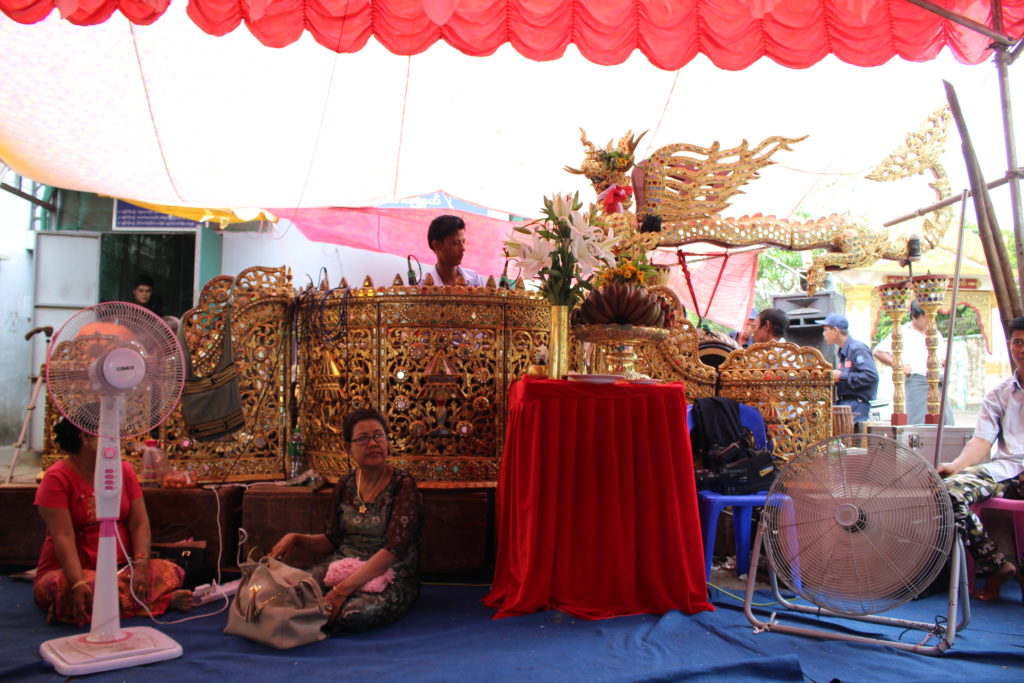 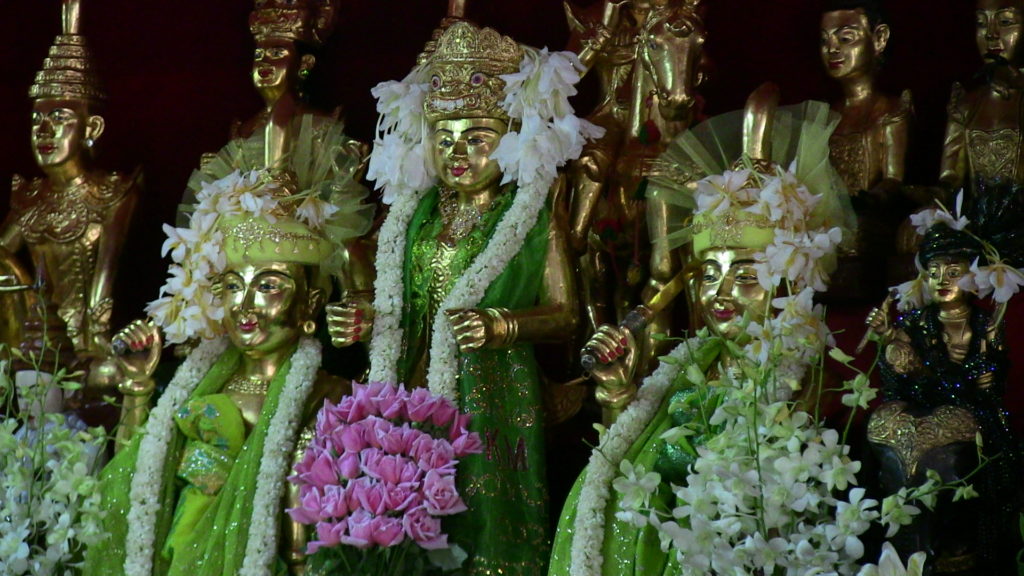 In Burma (Myanmar), the local form of Theravada Buddhism includes the worship of local spirits, the nat, mythical figures of exceptional human beings who encountered a violent death and became spirits. Some of these spirits have been organised into a pantheon of 37 figures since the beginning of the Burmese monarchy (11th century), as part of a state cult: the Thirty-seven Lords, or Thounze-hkunna Min in Burmese. Devotees today turn to the nat to obtain help and advice; in turn, they organise a nat pwe ceremony.

A nat pwe (or nat kana pwe) is a private ceremony in which devotees pray and invoke the local spirits to obtain health and wealth. The word “pwe” translates the inherent ambivalence of this celebration: a nat pwe is both an “offering to the spirits” and a genuine “celebration”.

The ceremony is held in the private home of a devotee. A temporary bamboo pavilion, called a kana, is erected for this occasion and usually extends onto the public street. One side of the pavilion hosts the sacred images of the spirits (poun daw), which are believed to be alive, and are surrounded by various offerings of flowers and food. The scents of the offerings, incense and perfumes, together with the sound of the music accompanying the spirit possession dances, help create the ceremony’s special sensorial dimension (fig. 0.1).

A celebration can last several days, during which different spirits are successively invited, so that the devotees can interact with them by presenting them different offerings. This is made possible by the presence of ritual specialists, the nat kadaw, or “spirit brides” (fig. 0.2), a historically female role but one that in urban centres is now often played by homosexual or transgender individuals. During the ceremony, the nat kadaw act as spirit mediums, calling up the spirits in a precise order and offering their bodies as a vessel for the nat. At particular moments of the ceremony, the devotees themselves take part in the possession dances, celebrating the spirits with family and friends (fig. 0.3).

During a pwe, the devotees ask the nat kadaw to act as their intermediary. The ceremony organisers are expected to present different types of offerings – food, cigarettes, drinks – to the different spirits embodied in the nat kadaw. The offerings vary according to the identity of the spirit embodied; indeed, the devotees must be careful to present the right kind of offerings to the right spirit so as not to offend it and to receive the requested help.

The nat kadaw dances are accompanied by the sound of the hsaing waing ensemble (fig. 0.4). As in other South East Asian music cultures, the ensemble is composed mostly of tuned percussion instruments, in particular drums and gong-chimes. Unlike other music ensembles in South East Asia, however, the Burmese hsaing waing ensemble is characterised by the presence of tuned drums and particularly by the pat waing drum circle, which is one of the symbols of Burmese music culture and leads the rest of the ensemble. It is accompanied by other tuned drums, several gong-chimes, bamboo idiophones, crotales, cymbals, shawms and one or more singers.

Inside the ritual pavilion the ensemble is normally placed in front of the altar with the nat images, occupying one entire side of the pavilion. Its presence is both visually and sonically imposing: refined gilded and coloured stuccoes decorate the wooden structures of the larger instruments, and the sound of the hsaing waing instruments can be heard from afar. Nowadays the use of microphones and amplifiers makes the sound of the ensemble reverberate at often unsupportable volumes, producing a saturation effect.

The main repertoire consists of the nat chin, the “spirit songs”. These have rhythmic, melodic and textual elements that are closely associated to one nat or to a group of nat with legendary links to one another. The joint performance of music and dance highlights the characteristics of the spirits and ritualises the main elements of their mythological story. In this way, the nat become physically present in the bodies of the spirit mediums, dancing in the ritual area and interacting with the devotees.

Songs, melodies, rhythms and dances are deeply involved in the celebration. The music and dance performance is fundamental to the ritual practice of this spirit possession cult, punctuating the different phases of a ceremony.

In the pantheon of the Thirty-seven, some spirit figures enjoy greater popularity than others. These include the two Muslim brothers Min Gyi and Min Lay (the Great and the Little prince), the two Lords of Taungbyone, a village a few kilometres north of Mandalay (fig. 0.5).

The legend of the two Taungbyone brothers is complex and has several episodes. They were born from the union of U Byatta, a messenger of the king and an Indian Muslim, and May Wunna, a flower-eating ogress residing on Mount Popa. The two brothers grew up in the service of King Anawratha of Pagan (11th century), the first great Burmese king and promoter of the Buddhist faith. The brothers accumulated experience as warriors and were endowed with magical powers. According to the legend, they were executed by king Anawratha for having disobeyed his direct order: they did not contribute to the construction of the Buddhist pagoda that the monarch wanted built in the village of Taungbyone; it is still possible today to see that two bricks are missing from the structure of the pagoda. After their execution, the two brothers became nat. In order to escape the two spirits’ wrath, the king instituted their cult and had them settled in the palace of Taungbyone, giving them authority over the surrounding region.

Devotees of the Brothers today abstain from the consumption of alcohol and pork, a sign of respect for their Muslim faith, especially in the period around participation in the famous Taungbyone festival, the most important national festival of the Thirty-seven Lords.

Music and dances for the Taungbyone

The possession dances that bring the Taungbyone to the ritual area present dance and musical elements that narrate their deeds and characteristics. These may be recognised in the performance of music and dances for the two brothers presented in the video (with subtitles).

Min Lay, the younger one of the two, is usually more active in the dances. In this video, the nat kadaw dances as Min Lay, extending his index fingers to signify the spirit’s great power in that sole finger. The power of the two spirits is also underlined by the lyrics of the songs performed in the video:

They are better than anyone else

Similarly, the lyrics of the song performed in the video emphasis the benefits obtained by the devotees through the positive influence of the two nat:

[Like] the tide, your riches will increase by thousands of millions

The two Brothers will lift you up / The colours [of your] glory, power [and] pride will increase

In the video, the lyrics expressed in the subtitles emphasise how the spiritual power of the two nat is closely linked to spiritual benefits, but also to financial and economic success. The devotees benefit from all this by celebrating the spirits with the ritual music and dance performance of the hsaing waing ensemble and of the nat kadaw.

2: Analysis of the ritual action